The Ukrainians can save the costs on gas at least UAH 2 billion and if the prices for the gas will be increased than even all UAH 6 billion!
Not that much is needed for this purpose: introduction of heating generators of the Lviv inventor Alexander Yekimovskikh into mass distribution. The burning-hot metal disc, that can substitute the ordinary gas burner, works like a powerful thermal infra-red irradiator. Its main peculiarity is that it is made from the metal that can resist oxygen and fire, and is a catalyst of complete natural gas combustion. It takes twice less gas and time consumption in order to boil the water in the kettle and the heat evolves 7 more times. “The Association of the Entrepreneurs of Lviv Region Krok” makes it possible for common consumers to get “Yekimovskikh’s Burner”.  The author of this invention narrates about the peculiarities of his “miracle burner” in detail:
“How it happened that you decided to create such a device?” 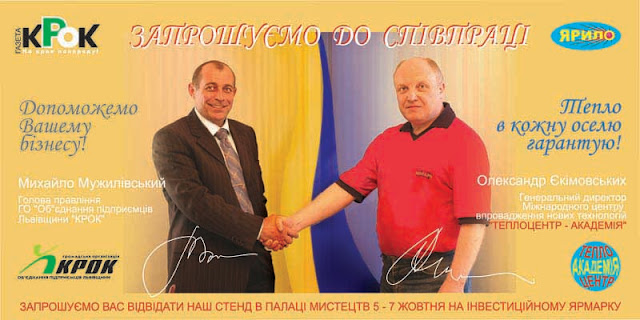 “In 1990 I decided to make miniatures from porcelain, and only in 1996 my dream came true. It is a very tedious and long work to burn them in big furnaces. That’s why I decided to make a miniature furnace for ceramics burning on the ordinary household gas-cooker. The result was a construction of metal that made it possible to get 1350*C from the ordinary cooker. That is the temperature for porcelain burning. It is enough 1150 and 1250 degrees for ceramics. All colour metals can get melt at this temperature. Gold, copper, bronze and brass get melt in several minutes on that gas burner. There is one more peculiarity. It is necessary to fix the system of the forced air supply at the jeweller’s factories and workshops. In my case it is possible to use an ordinary gas-cooker without any additional air sources in order to melt metals and burn ceramics. I measured all parameters of temperatures and also gas properties at that burning system, specifically that such a burner did not damage the human health in the kitchen. I made sure that the device was useful and safe for my organism.  Usually, when the gas is on, it burns the oxygen from the air that is necessary for our breathing. It turned out that in my system the water decomposes from the moist air that is supplied together with the gas through the pipe line and in such a way helps to decrease the oxygen removal from the kitchen. After 1000 degrees this water while interacting with the catalyst is decomposed into hydrogen and oxygen that provides the complete gas combustion. Due to this I got the additional energy from the gas as an additional temperature that is impossible to get in regular gas combustion systems without the forced air supply.”
“What does this alloy consist of?”
“Titan, aluminum, copper and iron. All these metals separately and together have the catalytic action, but the most important is that being together they can resist the corrosion of the oxygen. Any other metal when it is heated at such a temperature will turn into dross.”
“Is this invention patented?”
“The method and the invention are KNOW-HOW. Only the models are patented. I have more than 25 industrial models. We introduce into mass production now only the most inexpensive and affordable models for the household gas-cookers for the citizens of Ukraine. The rest will be produced only according to the individual orders. My catalysts of gas combustion can be used also for the ordinary gas-stoves, fire-places, AGV, KChM and other heating equipment. Thus it is possible to get more heat from the less gas combustion. And we will not heat the atmosphere, but we will pay for the real heat that will remain in the apartment. It will reduce the expenditures on gas in 2-3 times.”
“What will be the price for such a device for household gas-cooker?”
“Around UAH 25 – 35 by retail depending on the capacity and purpose.”
“Are there any analogies of your catalysts in the world?”
“The similar gas combustion system is used in the lighters with a thin platinum wire. The following natural sources of the heat energy like coal and timber while burning get the powerful infra-red irradiation, and the natural gas does not have such a quality. My catalyst added this property to the natural gas. I haven’t invented the catalytic way of combustion, I just adjusted it to the ordinary kitchen gas-cooker. Thus the efficiency of the ordinary gas-cooker while using my catalyst increased from 50-55% up to 100%. This invention helped me to use the natural gas energy at most that was not possible before.”
“Are there real customers for your KNOW-HOW?”
“The International Investment Fair will be held from 5 till 7 October 2005 in Lviv Palace of Arts. All my inventions and KNOW-HOW will be presented and offered for realization on the stand of the International Center of the New Technologies Introduction “Teplotsentr-Akademia”, I am also its founder and director since 2004. They correspond to the field of power system, and in forming of the hyper accurate 3-D relieves for manufacturing of the real original models of any details for cars and mechanisms and also matrixes for them with medal quality. I will use some amount of money received from the realization for the beneficent actions one of which will be the upgrading of the thermal places of the preschool and school institutions of Lviv City according to the All-Ukrainian program “Heat For Children”. I invited many representatives of the most outstanding companies manufacturers from different countries of the world in order to establish the common production and distribution of heating generators via trade and service net “Teplotsentr-Akademia”.
Heat and Health Into Every Home!
Maryna Oliynyk
Posted by yekimovskikh at 2:33 AM